Who Is A Devotee? 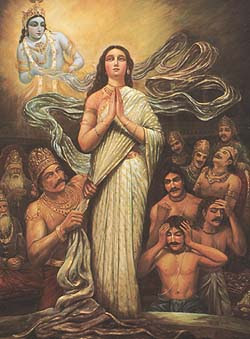 He who has no attachment for the objects of the world, who is free from egoism, lust, anger, who repeats the Name of the Lord, who serves the poor and the sick with Atma Bhava, who does Kirtan daily, who serves the Bhaktas with Narayana Bhava, who loves all, is a devotee of Lord Hari.

A true Bhakta or devotee cares not at all even for salvation or liberation. His heart is filled only with the true love of God. He spends his days and nights in incessant thought of the Lord. He never indulges in any thought of liberation or Mukti. He renounces Mukti even.
A devotee of Hari is always meek and humble. Name of God "Hari" is always on his lips. He sheds profuse tears when he is alone. He is very pious. He is very friendly to all. He has equal vision. He does good always. He never hurts the feelings of others. He has a spotless character. He never covets the property of others. He sees Hari in all beings.
Though there is heavy rain on all sides, the Chakori bird looks for water somewhere else. Even so, the Bhaktas look for their joy at the Lotus Feet of Lord Hari only, even though sensual objects go round them on all sides.
The language of the heart and soul is the same everywhere. Devotees of the whole world have one creed and one language to express their feelings and experiences.
Those who are endowed with Supreme devotion, who are stainless, who are beyond virtue and vice, who are perfectly calm and self-controlled, whose senses are under perfect subjugation, directly reach Lord Hari or Vasudeva without passing through the three stages; but those who are not equipped with perfect devotion pass through Aditya Mandala (sun's orb), Aniruddha, Pradyumna and Sankarshana.
According to Bhagavata, there are three kinds of Bhaktas. "He who beholds his own beloved deity in every object and vice-versa and feels consequently a sense of fullness everywhere is a superior devotee. He who loves God and is friendly to his devotees, kindly to the ignorant and indifferent to his own enemies is a middling devotee. He who, from traditional faith, worships Hari in images, but has no respect for His devotees or others, is an inferior Bhakta."
The devotees of God all over the world have indeed an unseen eternal link that unites them in the great service of waking up humanity to the consciousness of the Divine. All Glory be unto the Lord. The language of these Bhaktas of different climes is one. It is the language of heart. In them all differences have melted.
Through devotion and communion with the Lord, the Bhakta obtains all those powers which come to men through birth or drugs or Tapas (austerities) or Mantras.
The glory of a Bhakta is ineffable. Even the Lord becomes a slave of His devotees. Victory to Lord Hari. Glory to His Name. Glory to the devotees who sing the glory of the Lord and the glory of His Name.
Posted by Iyarkaya at 12:41 AM

Email ThisBlogThis!Share to TwitterShare to FacebookShare to Pinterest
Labels: Spiritual