Matrubhoomi (A Nation without Women) -Directed by: Manish Jha 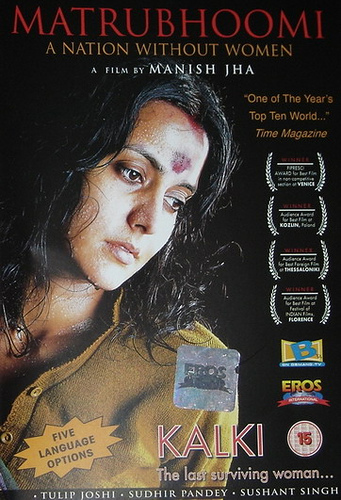 'Matrubhoomi' comes out as social teaser that evokes social consciousness against the rural atrocities and barbarism done on women. It's an endeavor that has been well received at many film festivals. Debutant director Manish Jha makes his candid attempt in exploring the plight of destitute rural women. The film aims at the concept of gender discrimination where woman is treated as object of attraction or reproductive machine. 'Matrubhoomi' means motherland and it comes out with tagline 'A Nation Without Women'. The film is presentation from Boney and Sridevi Kapoor.
The overdose of brutal violence and sexual aggression makes it hapless and avoidable affair. Shekhar Kapoor's 'Bandit Queen' has been conceived on similar lines but it was a life sketch of dacoit Phoolan Devi. This tale got appreciation from classes and masses. 'Matrubhoomi' is a realistic yet shocking voyage into the heart-piercing concept of brutalities against women by the mankind. Recently, Sudhir Mishra's 'Haazaron Khwaishein Aisi' essayed the hard-hitting facts of disturbed Indian politics in rural India. It got accolades from media and critics. 'Matrubhoomi' falls in this cadre.
Prakash Jha's 'Mrityudand' showed rural women valor and strength and their struggle to stand against injustice. Shyam Benegal and Govind Menon have been pioneers of parallel cinema in 70's and 80's and now director Manish Jha holds the baton. Jha's portrayal of the lead character "Kalki" is from rural Bihar. Tulip Joshi forays the character of "Kalki" with grace and style. Tulip entered filmdom as a Yash Chopra discovery with screen name "Sanjana" in 'Mere Yaar Ki Shaadi Hain'. In 'Matrubhoomi' she essays pivotal role that stands her in the cadre of thought-provoking actors who crave for socially relevant cinema. She has matured from the honey-coated mushy imaginative love stories into territories that depict harsh realities of life.
The film revolves around the series of brutalities and sexual assaults from sex-starved men on a hapless and destitute woman. The voracious and rapacious attitude of men towards women creates an impression that benevolence and compassion never existed between them. The film is based on real incidents but the magnitude of barbarism is immense and it looks a never-ending tormenting affair. In the hot pursuit of making it an international affair, filmmakers forget the thin line of division between social criticism and creative recklessness. The "Kalki" portrayal has been modern adaptation from Mahabharata's "Draupadi".
Jha's presentation looks distressing and evokes antipathy and abhorrence when five brothers practice their sexual marital rights on a hapless bride. The director gives the audience testing time for their patience for unscrupulous and barbaric physical and mental atrocities suffered by "Kalki". According to Jha, the film explores futuristic rural India where women are extinct species due to female infanticide. Isn't alarming for the coming generation? The film cogitates with the issue of woman's rights in rural India. 'Matrubhoomi' revolves around nubile nymphet Kalki (Tulip Joshi). Village priest Jagannath (Piyush Mehra) has his eyes set on her and brings marriage proposal for her from affluent family of Ramcharan (Sudhir Pandey).
Ramcharan has five sons - Rakesh (Pankaj Jha), Shailesh (Deepak Kumar Bandhu), Lokesh (Shrivas Nydu), Brijesh (Sanjay Kumar) and Sooraj (Sushant Singh). Greedy father of Kalki is offered half a million Indian rupees as dowry. On the wedding night all the five brothers decide to divide "suhaaagrat" among them. Lecherous Ramcharan becomes restless and even he tries to fulfill the sexual marital rights with Kalki. The fairy tale turns into a nightmare for Kalki as five brothers and their father repeatedly rape her. The gruesome sexual experiences torment her and she feels the pain and agony of this injustice. Sooraj shows some love and care for Kalki.
It brings them closer much to the annoyance of his father and four brothers. So, the brothers kill Sooraj. Kalki moves from there and seeks shelter in her father's home. Her father refuses to provide her shelter. In a bid to escape she seeks help from low caste servant boy and it triggers a caste war. The boy gets killed and Kalki is held responsible for his death. To avenge his death she is clapped in iron chains in a cowshed and repeatedly raped by her family and low caste villagers. Every village man rapes her, one after the other and night after night. Finally, she gets pregnant and everyone claims paternity. In cloudburst of acrimonious caste war and barbaric violence she gives birth to a baby girl.
Manish Jha's creative flamboyance explores the undiscovered and unpopular territory of rural barbarism. It sounds like Bollywood has been living in an escapist and imaginative world of fictional entertainment for ages. In a bid to create social awareness for women he suffocates audiences with shocking and intolerable violence. This is certainly not "entertainment", and the film offers no light moments. Commercial aspects have been completely ignored and it seems that the director made this film for the galleries and festivals. And, rightfully succeeds in his mission! Woman is considered to be extinct species like tigers. It looks like a mission to save women.
To create social awareness is a noble cause but experimenting with offbeat concepts needs authenticity and perception. Tulip Joshi shows promise in the character of Kalki and sounds encouraging for new genre of actors. The turbulence of emotions that she essays during the phases of film is worthy of appreciation. After RGV's 'D', Sushant Singh impresses as a loving and caring spouse. Sudhir Pandey, Piyush Mehra and the rest of the star cast, justify their characters very well. Interestingly, the film is released in six different languages all over the country and the subject might awaken consciousness among common men.

Intellectuals might appreciate 'Matrubhoomi'. But it will have few takers from amongst regular cine goers. Commercially, it stands bleak chances against technically crafted 'Dus' and a spine chiller 'Fareb'.
Download Links :

Email ThisBlogThis!Share to TwitterShare to FacebookShare to Pinterest
Labels: Movies, Must Watch, Short Vedios and Movies