What others say about Thirukkural & RESEARCH PAPERS ebooks

“There hardly exists in the literature of the world a collection of maxims in which we find  such lofty wisdom as in Thirukkural”
- Dr. Albert Schweitzer, Nobel Laureate
“ I wanted to learn Tamil, only to enable me to study Valluvar’s Thirukkural through his mother tongue itself…. There is no one who has given such treasure of wisdom like him.”
- Mahatma Gandhi
“Thirukkural is a contribution of the Tamil creative genius to the world cultural treasure and should be familiar to the whole world and admired and beloved by allin the same way as the poems of Homer, the dramas of Shakespeare, the pictures of Rembrandt, the cathedrals of France and the sculptures of Greece”
- Prof. Kamil Zevelebil, Tamil scholar
“The Kural is an integral painting of a civilization which is harmonious in itself and which possesses a clearly recognizable unity."
- Dr. G. U. Pope, Christian Missionary and Translator of Thirukkural in English
“Humility, charity and forgiveness of injuries are not described by Aristotle. Now these three are everywhere forcibly inculcated by this Tamil Moralist – Thiruvalluvar.”
- Sir A. Grant, British Scholar and Politician
“Thiruvalluvar’s Kural is one of the gems of the world literature.  He stands above all races, castes, and sects, and what he teaches is a general human morality and wisdom.  No wonder, that the Kural has been read, studied and highly praised in the land of its origin for centuries, but also found many admirers in the west, ever since it has become known.”
- Professor M. Winternitz, Germany
RESEARCH PAPERS
A call for abstracts was issued during August 2004. In response to the call for the abstracts, we received more than 260 papers. Out of this, 100 abstracts were approved by the Technical Evaluation Committee and the authors were asked to write detailed papers. The detailed papers were then evaluated and 40 papers have been accepted for publication. Out of the 40 papers, about 15 will be presented at the Conference. The three best among them will be awarded prizes at the Conference. 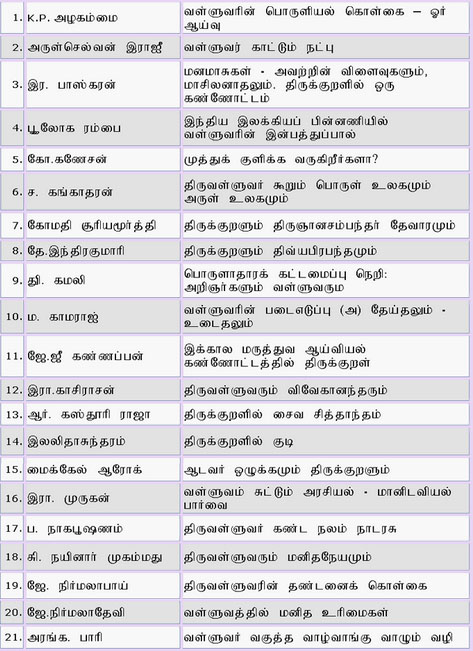 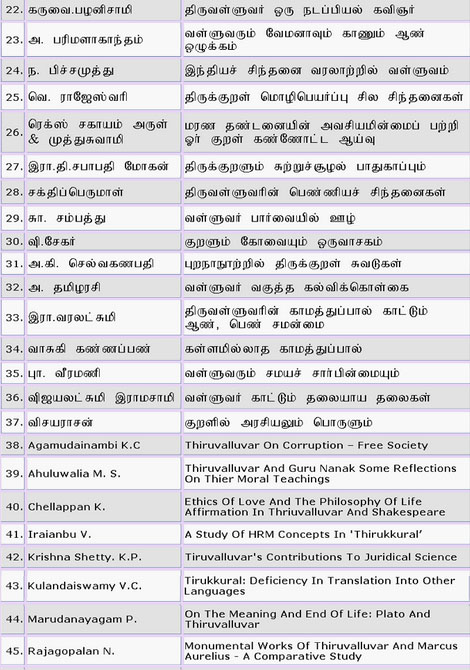