The Purpose of Sannyasa 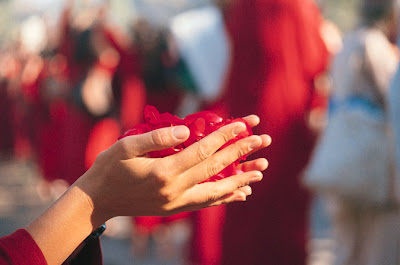 Sannyasins exist only for a universal purpose. They are the custodians of spirituality - the advancement and elevation of humanity. To equip themselves for the noble task entrusted to their care they first isolate themselves from the rest of mankind as a necessary discipline.
Unfortunately, this separation has become a permanent condition - a unit outside the pale of the rest of humanity, struggling valiantly in the cities and fields. Losing touch with others has made us forget the part we have to play and to forget our work as teachers and enlighteners.
We have once again to bestir ourselves and recommence playing our destined part, to be one united body, dedicated to the noble ideal of exerting ourselves unselfishly and wholeheartedly for ushering in the new era of brotherhood and peace that must follow after the years of savage strife and bloodshed the world is now plunged in.
Every section of humanity will play its part in the reconstruction of the new world on a worthier basis. If the new civilisation is to be enduring, it has to be based on lasting values of a spiritual nature. This is the work of the sannyasins. We have to set to work by precept, actual example and active work. Let us start with earnestness and faith. The way to achieve this is selfless union.
A sannyasin has a different angle of vision. He has different eyes. He looks upon everything from an absolutely different point of view. Just as a man who wears green spectacles, sees green objects everywhere, so also a gyani sees Atman everywhere through his new eye of wisdom. There is absolutely no personal element in him. He has not a bit of selfish interest. The lower self is completely annihilated. He lives for serving all. He feels the world as his own self. He actually feels that all is himself only. There is not a single thought or feeling for his personal little self. He has cosmic vision and cosmic feeling. Just as the river has joined the ocean, he has joined the ocean of bliss, knowledge and consciousness. He thinks and feels and works for others.
A genuine sannyasin is a proof of the heights scaled in the development of spiritual wisdom, in a resolute disregard for the merely materialistic values and complete devotion to the supreme ends and values of human existence. It has been, through several centuries, the distinctive role of the enlightened sannyasins to disseminate more by the example of their lives than by word of mouth.
They have kept up the traditions of spiritual development, breathing peace and welfare for all mankind, proved the worth and beauty of the inner spirit in man over the body-mind organism that the human individual is, over the temptations and allurements of the sensual and the worldly, and have established relations with the infinite being that alone sustains all the manifest universes.
This world is woven by the thread of light and darkness, good and evil, truth and falsehood. In social life, evils are recurrently manifesting themselves and into the body of the sannyasin community too there have entered several unwholesome elements. Therefore, from a new spiritual centre, we must seek to eliminate the unworthy from the order.
It is only when the basis of all cultures, the foundation of all movements, the divinity in man, is inspired to make itself manifest in the environment of high aspiration and moral growth rendered possible by the labours of the sannyasins that we can find on earth, peace, happiness, genuine progress, real prosperity and a purposive, meaningful and fulfilled existence.
(Excerpt from "Sannyasa Dharma")
Posted by Iyarkaya at 5:04 AM