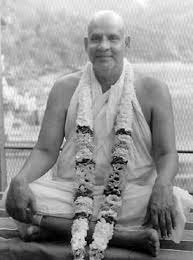 During the vedic era, asceticism was influenced by the preponderance of karmakand, or ritual, with the underlying quest for Brahman, the ultimate truth. It seems that the Rishi parampara was the accepted form of vedic asceticism and not sannyasa which evolved at a later date. In the upanishadic period, doubts were expressed as to whether karmakand could by itself lead to moksha. Such questioning eventually resulted in a greater emphasis on viveka and vairaghya, discrimination and detachment, for final liberation from worldly bondage.
In the 8th century, Shankara established the first Shaiva monastic headquarters, wherein knowledge was considered supreme to the exclusion of karma (ritual). Later, Ramanand and other Vaishnava sannyasins added an element of bhakti into the tradition. From the sixteenth to the nineteenth centuries, however, the sannyasa orders passed through a difficult period due to foreign invasions and political upheavals. Further, under the materialistic influence of the western culture the sannyasa tradition was considered as an anachronism by the educated intellectuals of the country.
With the advent of Ramakrishna Paramahamsa, Swami Dayananda, Paramahamsa Yogananda Giri, Swami Ram Tirtha, Swami Vivekananda, Swami Sivananda Saraswati, Paramahamsa Satyananda and other spiritual luminaries during the 19th and 20th century, the sannyasa tradition was again elevated to a position of respect and reverence in the minds of the people. Although many of the sannyasa traditions and values have been modified to suit the changing social, religious and political views, still the essence of the sannyasa ideal remains the same.
The three fundamental principles of sannyasa: yajna, viraja and parivrajna, depict the sannyasin's attitude towards himself, the society and the cosmos.
Yajna (sacrifice): The ancient rishis performed sacrifices in order to maintain a relationship with the cosmos. Today due to social and economic factors these ritualistic sacrifices are no longer being performed. However, the sannyasin is now expected to perform the sacrifice, making himself an oblation. His whole life is regarded as a part of the cosmic ritual. The exoteric sacrifices prevalent in the vedic times, became esoteric as they were integrated into sannyasa life. This demands a spirit of utter dedication to the guru and to the precepts of sannyasa.
Viraja homa (purification or death rite): An oblation in the cosmic sacrifice must be pure and free of blemish. A sannyasin must be purified before offering himself as an oblation. Purity cannot be attained without renunciation. Renunciation of all worldly attachments is the foundation on which sannyasa is built. Viraja homa is the symbolic death rite which the aspirant undergoes at the time of sannyasa initiation, as an act of renunciation. Performance of the viraja homa signifies that the initiate has died to his previous life and associations and is born again into sannyasa. Being new and pure, he is fit for oblation into the cosmic sacrifice, and henceforth he undertakes to lead a life of dedication and renunciation.
Parivrajna (wandering): The aim of a sannyasin in undertaking parivrajna is to put the ideal of renunciation into practice, and thereby to test one's purity. The parivrajaka sannyasin gets plenty of opportunities to give up passion, anger, delusion, possessiveness, egotism and duality, while wandering. In modern times parivrajna is undertaken by those sannyasins who move about continuously spreading the guru's teachings and mission. In this way parivrajaka sannyasins are able to elevate the society while moving from place to place. They are no longer looked down upon as beggars and parasites as they are able to offer something worthwhile to the people. Instead of begging, they receive food and shelter which is offered, as well as guru dakshina and transportation fare to their next destination.

Modern sannyasins are not only educated in spiritual matters, but many are degree holders in various areas of philosophy, literature, science and medicine. Whereas previously young and illiterate sannyasins were allowed to live in the gurukul and then roam about outside, now they must complete their education before receiving initiation. After initiation their spiritual education begins. This means that the sannyasins of today are fully educated in all matters, practical as well as spiritual, and so they are better able to deal with the maintenance, management and propagation of the mission.
The age of idle sannyasins is over. Now aspirants who are not ready, able or willing to work are not considered as eligible for sannyasa. Sannyasins are expected to work ceaselessly for the mission, to obey the guru implicitly and to follow strict discipline in the ashram as well as outside. Today's society will no longer support those sannyasins who roam about and beg without giving anything substantial to the people in return.
In order to revive the sannyasa tradition and values in view of the changes taking place within the sannyasa culture, it was necessary to introduce the element of karma yoga or selfless service into sannyasa life. This is one of the basic differences between the traditional and modern concepts of sannyasa. Vedic religion had looked down upon karma as an expendible preliminary for the attainment of moksha. However, the truth is that karma is unavoidable for all living beings. So, why not spiritualize it and help to create a better world? Through karma yoga, work is raised to the level of worship. Work is regarded as a means of manifesting the potential divinity of the sannyasin. It helps to maintain a good relationship with society and enhances the dignity of the sannyasin. Those sannyasins who spend their time in useful works, along with study and meditation, are able to inspire and elevate the people, others are not.
Posted by Iyarkaya at 4:48 AM