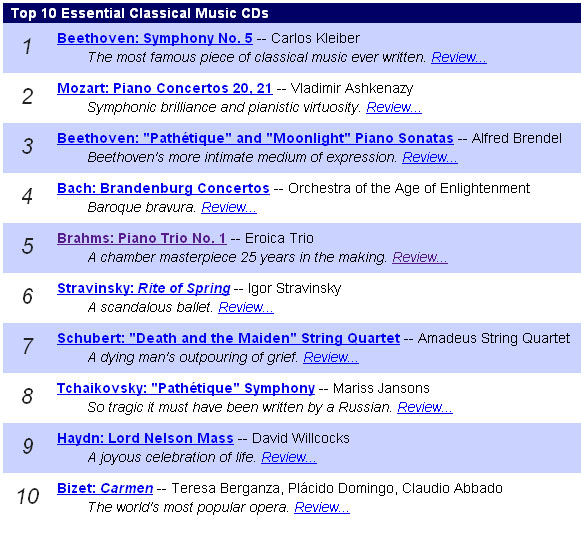 So you want to start listening to classical music, but don't know where to begin? Here's our list of the ten essential CDs that every classical music fan should have -- if you're only going to buy ten classical CDs in your life, they should be these ten.
Our list provides a sampling of the greatest works from a wide variety of styles and time periods. There are roaring symphonies and intimate chamber works, old-fashioned Baroque music, a scandalous twentieth century piece, and everything in between. You're bound to fall in love with at least a couple of works on this list, and when you do, you can follow the links at the bottom of each description to find pages of similar works by composer, era, or genre.
These works are all among the most popular pieces performed today, and there are dozens -- if not hundreds -- of recordings of each. In choosing our recommended recordings, we have kept one eye on the quality of the performance and the other on the price. Most of the CDs in this list are "mid-priced" ($10-$12 each, or $16-$20 for a two-disc set). The recordings that are "full price" ($15-$18) are here because we feel they are so special that even a beginner will appreciate their unique qualities 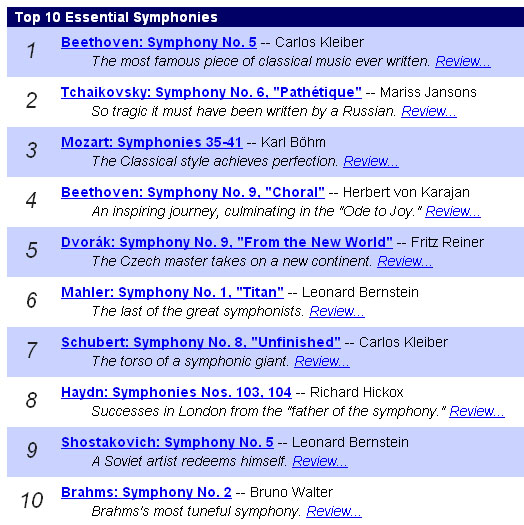 A symphony is a multi-movement work for full orchestra. A typical symphony has four movements. The first movement is usually fast and contains two or three themes that are repeated and developed throughout the movement. The second movement is usually slow and lyrical, while the third movement is in a dance style such as waltz, minuet, or scherzo. The finale may ta
ke on any of a number of forms, including theme and variations, rondo (one repeated theme and a number of unrelated themes), or the same form as the first movement.
The symphony developed in the first half of the eighteenth century from the Italian opera overture (called sinfonia). In the second half of the century, Haydn, Mozart, and Beethovenperfected what we now call the Classical symphonic style. Mozart wrote 41 symphonies, and Haydn, the "father of the symphony," wrote 106. Beethoven wrote only nine, but they were so revolutionary that his shadow loomed over all symphony composers for the next hundred years. (Brahms in particular was so intimidated that he didn't write a symphony until he was forty.) The nineteenth century was a golden age for the symphony: one could not be accepted as a truly great composer without having written one. As composers in the twentieth century began to break away from the accepted notions of harmony, they also began to experiment with new forms, and the symphony lost some of its prestige and popularity. However, in today's concert halls the symphony is still king; hardly a program is played that does not feature one. 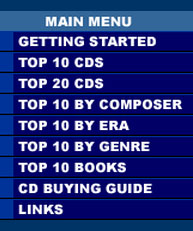