Out of the mouths of babes

…and into the mouths of beasts

Warning: some of the following 15 stories are not pleasant. One in particular is gut-wrenching and slightly depressing. The others are just as absurd and could easily fit in a work of fiction. I could write an essay on these unique women and their stories… but a picture speaks a thousand words.

Vijay Luxmi Sau went to visit her parents out of town. She came home with a new addition to the family – a female baby fawn. Rumor has it that the fawn’s mother abandoned it when a pack of stray dogs attacked. Vijay found the fawn scared and hungry; she began breastfeeding the fawn and brought the new “baby” home to her husband and 7 month old human child.

Some people really love their pets. Chouthi Bai, an Indian from the Kilchu village, is one of them. Her pet calf is 23 days old in this picture, and has enjoyed breast milk every single one of them.

What you’re looking at is considered normal among certain indigenous tribes throughout New Guinea. Are the pigs getting hungry? No problem… Susan will go out and feed ‘em. In exchange, the pigs help out around the house. For instance, they’ll scour the sweet potato fields for scrap peelings and churn the soil in the process. Seems fair in my book. 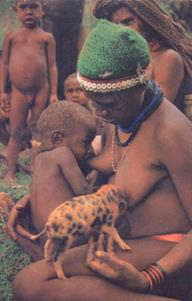 For the Awa Guaja tribe in the Brazilian Amazon basin, community means more than humans. It also includes monkeys, which are considered sacred animals. The monkeys are taken from their mothers after birth and grow up sleeping, playing and breastfeeding alongside human children.
More Info:
http://thatgirlisfunny.com/2010/12/15-women-who-breast-feed-animals-weird-or-wonderful/