"The role of music lies in helping the consciousness uplift itself towards the spiritual heights."The Mother 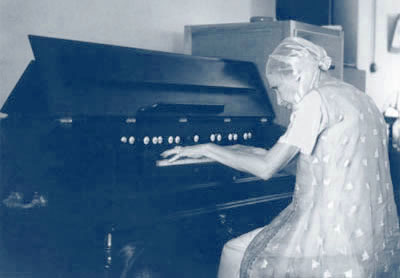 "There is a domain far above the mind which we could call the world of Harmony and, if you can reach there, you will find the root of all harmony that has been manifested in whatever form upon earth. For instance, there is a certain line of music, consisting of a few supreme notes, that was behind the productions of two artists who came one after another - one a concerto of Bach, another a concerto of Beethoven. The two are not alike on paper and differ to the but in their essence they are the same. One and the same vibration of consciousness, one wave of significant harmony touched both these artists. Beethoven caught a larger part, but in him it was more mixed with the inventions and interpolations of his mind; Bach received less, but what he seized of it was purer. The vibration was that of victorious emergence of consciousness, consciousness tearing itself out of unconsciousness in a triumphant uprising and birth.
If by Yoga you are capable of reaching this source of all art, then you are master, if you will, of all the arts. "
-The Mother
"Among the great modern musicians there have been several whose consciousness, when they created, came into touch with a higher consciousness. Caesar Frank played on the organ as one inspired; he had an opening into the psychic life and he was conscious of it and to a great extent expressed it. Beethoven, when he composed the Ninth Symphony, had the vision of an opening into a higher world and of the descent of a higher world into this earthly plane. Wagner had strong powerful intimations of the occult world; he had the instinct of occultism and the sense of the occult and through it he received his greatest inspiration. But he worked mainly on the vital level and his mind came in constantly to interfere and mechanised his inspiration. His work for the greater part is too mixed, too often obscure and heavy, although powerful. But when he could cross the vital and the mental levels and reach a higher world, some of the glimpses he had were of an exceptional beauty, as in Parsifal, in some parts of Tristan and lseult and most in its last great Act. "
-The Mother
(The Mother, while describing some experience...)
... suddenly I heard, as if they came from all the corners of the earth, those great notes one sometimes hears in the subtle physical, a little like those of Beethoven's Concerto in D-major, which come in moments of great progress, as though fifty orchestras had burst forth all in unison, without a single false note, to express the joy of this new communion between Nature and Spirit, the meeting of old friends who come together again after having been separated for so long.

Q: Mother, how can one enter into the feelings of a piece of music played by someone else?
The Mother: In the same way as one can share the emotions of another person by sympathy, spontaneously, by an affinity more or less deep, or else by an effort of concentration which ends in identification. It is this last process that one adopts when one listens to music with an intense and concentrated attention, to the point of checking all other noise in the head and obtaining a complete silence, into which fall, drop by drop, the notes of the music whose sound alone remains; and with the sound all the feelings, all the movements of emotion can be perceived, experienced, felt as if they were produced in ourselves.
"There are different levels. There is a whole category of music that comes from the higher vital, which is very catching, somewhat (not to put it exactly) vulgar, it is something that twists your nerves. This music is not necessarily unpleasant, but generally seizes you there in the nervous centers. So there is one type of music which has a vital origin. There is music which has a psychic origin - it is altogether different. And then there is music which has a spiritual origin; it is very bright and it carries you away, captures you entirely. But if you want to execute this music correctly you must be able to make it come through the vital passage. Your music coming from above may become externally quite flat if you do not possess that intensity o f vital vibration which gives it its splendor and strength. I knew people who had truly a very high inspiration and it became quite flat, because the vital did not stir. I must admit that by their spiritual practices they had put to sleep their vital completely - it was literally asleep, it did not act at all - and the music came straight into the physical, and if one were connected with the origin of that music, one could see that it was something wonderful, but externally it had no force, it was a little melody, very poor, very thin; there was none of the strength of harmony. When you can bring the vital into play, then all the strength of vibration is there. If you draw into it this higher origin, it becomes the music of a genius.
For music it is very special; it is difficult, it needs an intermediary. And it is like that for all other things, for literature also, for poetry, for painting, for everything one does. The true value of one's creation depends on the origin of one's inspiration, on the level, the height where one finds it. But the value of the execution depends on the vital strength which expresses it. To complete the genius both must be there. This is very rare. Generally it is the one or the other, more often the vital. And then there are those other kids of music we have - the music of the cafe-concert, of the cinema - it has an extraordinary skill, and at the same time an exceptional platitude, an extraordinary vulgarity. But as it has an extraordinary skill, it seizes you in the solar plexus and it is this music that you remember. It grasps you at once and holds you and it is very difficult to free yourself from it, for it is well-made music, music very well made. It is made vitally with vital vibrations, but what is behind is frightful.
But imagine this same vital power of expression,with the inspiration coming from far above - the highest inspiration possible, when all the heavens open before us - then that becomes wonderful. There are certain passages of Caesar Frank, certain passages of Beethoven, certain passages of Bach, there are pieces by others also which have this inspiration and power. But it is only a moment, it comes as a moment, it does not last. You cannot take the entire work of an artist as being on that level. Inspiration comes like a flash; sometimes it lasts sufficiently long, when the work is sustained; and when that is there, the same effect is produced, that is, if you are attentive and concentrated, suddenly that lifts you up, lifts up all your energies, it is as though someone opened out your head and you were flung into the air to tremendous heights and magnificent lights. It produces in a few seconds results that are obtained with so much difficulty through so many years of yoga. Only, in general, one may fall down afterwards, because the consciousness is not there is the basis; one has the experience and afterwards does not even know what has happened. But if you are prepared, if you have indeed prepared your consciousness by yoga and then the thing happens, it is almost definitive. "   -The Mother
Q: Is sound peculiar only to the physical world or is there sound in the other domains also?
The Mother:There is sound there also.

Q: In the same way as here?
The Mother:There certainly is a sound in all the manifested worlds, and when one has the appropriate organs one hears it. There are sounds which belong to the highest regions, and in fact, the sound we have here gives the feeling of a noise in comparison with that sound. For example, there are regions harmonious and musical in which one hears something which is the origin of the music we have here - but the sounds of material, physical music seem absolutely barbaric in comparison with that music! When one has heard that, even the most perfect instrument is inadequate. All constructed instruments, among which the violin certainly has the purest sound, are very much inferior in their expression to the music of this world of harmonies. The human voice when absolutely pure is of all instruments the one which expresses it best; but it is still... it has a sound which seems so harsh, so gross compared with that. When one has been in that region, one truly knows what music is. And it has so perfect a clarity that at the same time as the sound one has the full understanding of what s said. That is, one has the principle of the idea, without words, simple with the sound and all the inflexion of the... one can't call it sensations, nor feelings... what seems to be closest would be some kind of soul-states or states of consciousness. All these inflexions are clearly perceptible through the nuances of the sound. And certainly, those who were great musicians, geniuses from the point of view of music, must have been more or less consciously in contact with that. The physical world as we have it today is an absolutely gross world; it looks like a caricature. Conscious Hands ... I knew how the consciousness works. Well, it is impossible to learn piano or to do painting unless the consciousness enters into the hands and the hands become conscious independently of the head. The head can be busy elsewhere, that has no importance. * Q: Is it possible to make my hands conscious so that they do nothing imperfect, incorrect or wrong? What is the way to do it, Mother? It is quite possible, by concentrating on the hands when they are doing something. The hands of painters, sculptors, musicians (especially pianists) are usually very conscious and always are skillful. It is a question of training.
Is Music Superior to other Arts?
Sri Aurobindo:
"I do not know what to say on the subject you propose to me - the superiority of music to poetry - for my appreciation of music is bodiless and inexpressible, while about poetry I can write at ease with an expert knowledge. But is it necessary to fix a scale of greatness between two fine arts when each has its own greatness and can touch in its own way the extremes of aesthetic Ananda? Music, no doubt, goes nearest to the infinite and to the essence of things because it relies wholly on the ethereal vehicle, sabda, (architecture by the way can do something of the same kind at the other extreme even in its imprisonment in mass); but painting and sculpture have their revenge by liberating visible form into ecstasy, while poetry though it cannot do with the sound what music does, yet can make a many-stringed harmony, a sound revelation winging the creation by the word and setting afloat vivid suggestions of form and color, - that gives it in a very subtle kind the power of all the arts. Who shall decide between such claims or be a judge between these god-heads?"