Is there one GOD or many? IS THERE ONLY ONE SIVAM? by Salem R.Kuppusamy 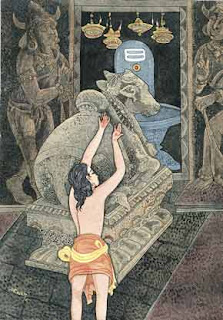 Question by Dr.Vinayaga moorthy
IS THERE ONLY ONE SIVAM?
Answer
Dear Sir,
Can there be any doubt about the number of the ultimate Being?
Mahayogi Thirumoolar says 'Ondrae Kulamum, Oruvanae Devanum', Saint Patinathaar says ' Ondrendru iru. Deivam undenru iru.' Vallalar confirms it 'Oru uldalil er uyir enalaamo?' In one body there can be only one spirit. In the same way in the cosmic body also there can be one ultimate spirit.
The doubt arises because of the claiming of various religions that their own brand of God is the supreme. How to solve this problem? As usual it was Vallalar who solved it for me. Vallalar says 'Chith sabaiyil vilanguginra deivam Athe deivam', which means the living God inside the agna chakra, i.e., One's own soul or 'Jeevan' is the temple of Chithambaram inside which the living Lord of Arutperum Jothi is eternally dancing. As long as one tries to see God in temples outside this doubt will linger in the mind.
Long before Saint Manika Vasagar announced the same truth in his immortal words.. ' Thenaadu udaya Sivane Pootri, En naattavarkum iraivaa potri'. At the surface level themeaning of this dictum could be questioned by a christian or musalman. But the real meaning is an eternal truth. 'Thennaadu' does not mean South India or Chithambaram, a geographical location found on the map. What he means by thennadu is the Agna Chakra inside which is the jeevan which is the real temple of Chidhambaram.
Chidh - means life, living spirit.
ambaram - means Sky or temple.
This can be verified by the sacrad verses of vallalar: ' Uyirellam Podhu [All souls are the dancing platform of God. And "Uyirellaam oru nee thiru nadam puriyum thirupodhu ena therintheen" - meaning I discovered that, all souls are a platform on which the only God's eternal dance is being performed. ]
Thiru moolar says 'Seevan yena Sivan yena verillai' meaning there is no difference between Seevan or Jeeva and Siva. There is no difference between 'Pasu' or soul and 'Pathi' or God provided the soul is purified of the malas, anava, kanma and maya.
Saint Aunagiri naarthar says there is but one task for man to do in this life : To pass the test of overcoming the illusory notion that man is not God potentially. 'Seevan Sivan ena theree'.
According to the Saivagamas and saivasidhantha tradition there are four steps to God :
1. Sariyai or doing service at temples
2. Kiriyai or performing poojas at temples or at home
[Both are done outside the body]
3. Yoga or trying to see God in ones own body.
4. Gnana or attaining God in ones body.
[The later two are attained inside the body.]
Every disciple or aspirant is expected to move on from the first step to the last because unless one achieves Gnana one can never see God : 'Gnaname Moksha Dhwara'. Only through the door of Gnana or wisdom one can enter into the land of Salvation.
All these things are clearly said in the Saivite Shasthras as well as in vallalars arutpa. Even in the Bible, Jesus says, "The kingdom of God is within you". Only it falls short of identifying the place which is the spirit.
Thanking you
Love and Blessing
R. Kuppusamy
Posted by Iyarkaya at 3:31 AM